A jazz quintet from Poland, made up of young, prize-winning musicians. With their five records they confirmed their position on the Polish jazz market. Even such authorities in the field as Jarek Śmietana and Bogdan Chmura, expressed enthusiasm about their musical achievements. A positive response in the trade press, both the Polish and foreign one, has contributed to the growth of interest in the band beyond the borders of Poland. The band receives proposals for concerts in the farthest corners of the globe. Currently they are getting prepared for other international appearances. The band appeared at the second edition of the Festival of Polish Stars of the World Jazz in Moscow, as well as at the International Delhi Jazz Festival in 2013 and Varna Summer International Jazz Festival in 2014. During their stay in India, New Bone went down in history as the first band that performed with live jazz concert in Kashmir!

The band was formed in 1996 with initiative of Tomasz Kudyk, a trumpeter. The debut album “Something for now”, which featured compositions by the leader of the band, was recorded in 2004. The debut recording resulted in numerous concerts throughout Poland. In 2009 New Bone band recorded the second album “It’s not easy”, which is the continuation of “Something for now”. In January 2012, the band recorded material for the third author’s album entitled “Destined” (premiered April 2012). In August of 2013, Paweł Kaczmarczyk was replaced with Dominik Wania, with whom the band had recorded their fourth album “Follow me” in 2014. The author of the music, as well as the major part of the compositions performed by New Bone, is the band leader Tomasz Kudyk. 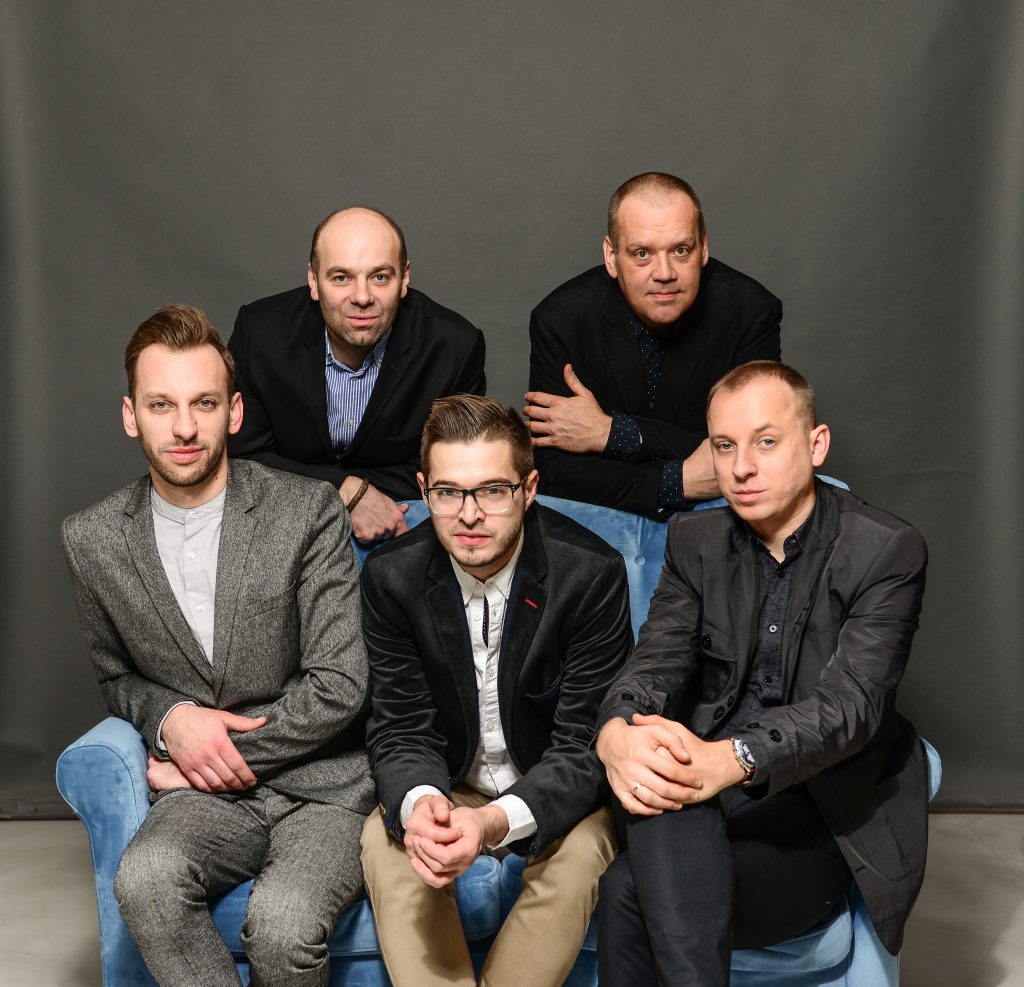 Trumpeter, composer, graduate of the Music Academy in Kraków. Jazz has become his passion already in high school, surely under the influence of his father Jan Kudyk (the leader of Jazz Band Ball Orchestra). He gained experience from what he studied at home, as well as from the participation in jazz workshops and contact with the music ambience. In 1996 he founded, along with his friends, a quintet New Bone with which he recorded two author’s albums: ”Something for now” and ”It’s not easy”. The third record of the band, ”Destined”, was published in April 2012. Tomasz Kudyk is the author of the most compositions performed by the band. Until now he had a possibility to collaborate with such musicians as: Janusz Muniak, Maciej Sikała, Jarek Śmietana, Wojciech Karolak, Arek Skolik, Joachim Mencel, Jan Pilch, Marek Stryszowski, Leszek Kułakowski, Adam Pierończyk. In 2011 he gained the title of Ph.D. in music arts in the instrumental studies discipline. Currently he works as an adjunct at the Faculty of Modern Music and Jazz at the Music Academy in Kraków.

The youngest member of the band. A student of Music Academy in Kraków at the Jazz and Modern Music Department, in the class under supervision of Ryszard Krawczuk, PhD. Participant and winner of many festivals in Poland and abroad. Co-founder of N.S.I. band and the composer of many of its pieces. In 2012, he and his band won the 1st prize and the Grand Prix on the 5th Azoty Tarnów International Jazz Contest (evaluated, among others, by Kenny Garrett), and  the 1st prize and the Grand Prix in the Jazz Juniors competition. He collaborated with numerous highly esteemed bands and musicians, such as Leszek Żądło, Wojciech Groborz, Zbigniew Namysłowski / Big Band, Jarek Śmietana, Michał Urbaniak.

Graduated from the Academy of Music in Krakow, Poland in 2005 where he was an honors music student studying classical piano performance. In 2006 he was awarded The Helena Foundation Presidential Scholarship at New England Conservatory of Music in Boston where he pursued Master of Music degree in Jazz Performance. While at NEC Dominik Wania studied with Danilo Perez, Jerry Bergonzi, George Garzone, Ran Blake, Allan Chase and Frank Carlberg. He also was a member of one of NEC’s prestigious Honors Ensembles. He has performed and collaborated with many prominent musicians: Tomasz Stanko, Marcus Miller, Lee Konitz, Gary Thomas, Eddie Henderson, Zbigniew Namysłowski, Janusz Muniak, Zbigniew Wegehaupt, Piotr Baron, Piotr Wojtasik, Maciej Sikała. Currently he is involved with significant projects including Maciej Obara International Quartet and Noise Trio. Besides his performance activities he is also a DMA faculty member at the Academy of Music in Krakow and Institute of Jazz in Katowice. In June 2013 he released a debut album of his piano trio entitled „Ravel”.

Graduate of the Faculty of Jazz and Entertainment Music at the Music Academy in Katowice, double bass class of Jacek Niedziela. He is a laureate of several national competitions, such as: Jazz Juniors (Marcin Żupański Quartet, the first prize, 1997), Jazz nad Odrą (Jazz on Oder), Pomorska Jesień Jazzowa (Pomeranian Jazz Autumn). He collaborated with the following musicians: Quintessence Eryka Kulma, Krzysztof Popek Quartet, Janusz Skowron Quartet, Marek Bałata Quintet, Zbigniew Namysłowski Big Band, Wojciech Groborz Trio, Piotr Baron Quartet. Currently he lives in Kraków, where he usually performs in the club managed by an outstanding Polish saxophonist – Janusz Muniak. He is also a lecturer in the double bass class at the Faculty of  Modern Music and Jazz at the Music Academy in Kraków.

He is graduate of the Music School ”Artur Rubinstein” in Bydgoszcz, where he studied under the supervision of an outstanding teacher Mirosław Żyta. Currently, he is a student of the Music Academy in Kraków, at the Faculty of Classical and Jazz Music. His achievements so far have been the participation in competitions such as on Krokus Jazz Festival, Bielska Zadymka Jazzowa, Jazz nad Odrą, winning the International Competition of Young Jazz Bands – Jazz Juniors 2011 with PeGaPoFo band, participation in festivals in Poland and abroad, and mostly performances with great Polish jazzmen. Despite his young age, he is since a short time a member of Zbigniew Namysłowski quintet and New Bone band. He was also a member of Zbigniew Wegehaupt quartet. Together with his friends – Henryk Gradus and Kuba Płużek, he made a promising band – TTS Trio. He had an opportunity to perform with musicians like: Janusz Muniak, Tomasz Stańko, Leszek Możdżer, Adam Pierończyk, Joachim Mencel, Wojciech Groborz, Dominik Wania, Wojciech Karolak, Aga Zaryan, Paweł Kaczmarczyk, Jerzy Małek.